Screening the Past > Memory Trade: A Prehistory of Cyberculture

Memory Trade: A Prehistory of Cyberculture

In his video Scénario du film Passion (1982), Jean-Luc Godard tells a story about the birth of an aspect of cinema history – in particular, an aspect of the business of film, its industry. Godard evokes for us a mythical time in the early days of filmmaking during the silent era. The celebrated comedy filmmaker Mack Sennett would head out each day with his crew and cast. They would stop somewhere and start making up gags, bits of business. They never had much of an idea how the improvisations and inventions of one day would fit with those of the next day – but that’s the kind of logic they made up as they went along.

Soon enough, behind Mack Sennett followed an earnest accountant. He had been sent by the head office of the studio that was financing this madcap adventure in filmmaking. The accountant would trail behind making expenditure notes – “demolition of a car, 500 dollars”, “payment for a crowd of extras, 300 dollars” – and so on. The accountant would go home each night and put these notes in order – an order of days, and of scenes. He would write at the top of each page indications like: “Daytime – car chase scene – garbage dump”. Naturally enough, the studio and the accountant then started leaning on Mack Sennett to foresee what expenditure he would incur each day. “What scene do you think you’ll shoot tomorrow, Mack?” When Sennett started grudgingly responding to these questions and figuring out in advance what he would shoot, rather than just making it up on the spot, the accountant thrust his own ordered pages in front of the director and instructed him: “Lay it out like this – write on the top: Scene three – outdoors – love scene – front porch – late afternoon”.

And then Sennett was encouraged to write a little more by way of explicit scene instructions – so that everyone involved in production (art director, props director, actors, and so on) would know beforehand exactly what they had to do, and how much it would cost. The day that Sennett acquiesced to all these demands, according to Godard, marked the historic beginning of that odd form of writing which the film industry calls the script, or the screenplay.

This mythic little story by Godard sits somewhere between a tall story, a fable and a joke – it may even have some slim basis in anecdotal truth. So what is this story about silent movie-making doing in a review of a book about cyberculture? When you read Memory Trade itself, you may find yourself asking a similar question many more times. This book takes a series of somewhat unfashionable angles on the strange, indefinable, modish beast known as cyberculture. It is a surprising and serious book. It’s worth announcing clearly what Memory Trade is not about. It’s not about virtual reality gloves or suits. It’s not much about cyberpunk science fiction. It’s not explicitly about digital sampling in popular music or what’s referred to as ‘culture jamming’. It does not once mention virtual sex – which is a mercy. It’s not a tirade against capitalist corporations or the military-industrial complex. It’s more a book about thinking and writing, creativity and image-making. And it’s also not a book about the future, or futuristic forecast – it’s about what’s already possible and thinkable in the here and now.

Memory Trade is about what Tofts’ text calls the ‘prehistory’ of cyberculture. That prehistory trawls back through French post structuralism, through Samuel Beckett and James Joyce (to whom the book’s second half is devoted), through Freud and the ancient “art of memory”. It even goes back to Plato and Socrates, so it’s a pretty long prehistory. But it needs to be. One of the basic arguments of this book is that cyberculture is completely bound up with the histories of writing and language. Of course, because we can do them more or less easily and well, we tend to think of writing and language as the most natural things in the world. But Memory Trade argues persuasively that writing and language constitute a technology, in the fullest and truest sense of the word. They are vast machines or systems that we not only learn and master, but also internalise, take into ourselves. And once writing and language enter us, they change us.

Suddenly – in the most normal, everyday, old-fashioned way – we are mutants or cyborgs or interfaced beings, simply because written language has entered and changed us. These capacities effect and determine how we think, reason, order, even how we dream. Because I am a writer, I am often plagued by ridiculous, surreal dreams in which the letters of the alphabet, or the structures of a sentence, paragraph or essay take liquid or concrete form around me, navigating me through one storm and dumping me in the middle of another. But these kinds of dreams are somewhere inside all of us, and the daily crisis and comedy of this is not so far removed from the travails of the modern computer user – like a friend of mine who, after days and nights of feverish work at his terminal writing one article, sent me a plaintive message: “Systems crash is imminent”. I don’t know whether he meant that his computer was about to erase everything he ever wrote, or that he was about to have a nervous breakdown – in fact, he probably meant both simultaneously, so interlinked was he by then with his technology. Maybe he was the one running out of memory space, and his computer was the one having the anxious nervous breakdown.

I began this review with that Godard story because Memory Trade is a book all about taking normal, familiar concepts and then making them strange, showing how uncanny, weird and fundamentally mysterious they all are. Not only writing and language, but also such things as memory, or making puns, or playing around with all sorts of primitive conceptual toys for kids, like Freud’s favourite, the “mystic writing pad” or “magic writing slate”. All these areas of human experience are technologies which have to be invented, which separate us, alienate us in the first moment from some preceding state of nature. But they are also creative forms which open up new possibilities for poetry and storytelling. Memory Trade is directed against the new-fangled, self-important idea that, in our cyber age, ‘the book’, meaning old-fashioned literature, is dead and buried, along with all rational, linear thought. This book argues that we are always in between the old and the new, between the historical and the possible – and it argues that the poetic forms we already have already contain the possibilities for the slow revolution that will beset us in future cybercultures.

Memory Trade presents itself as a “jam session” in its interplay of text and images. McKeich’s superb digital images need as many close inspections as Joyce’s Finnegan’s Wake needs close re-readings. The strange hybrid beings which the artist conjures for us are hard to pin down in terms of any original state. They are humans within machines, and machines within humans. When you look closely, you see that they are also people within people, and people created from the most dizzying array of fabrics, textures and materials: web, lattice, chrome; scissors, paper, rock. Like that great film Alien Resurrection (1997), McKeich is especially good with the fantasticated eyes of these creatures: twinkling human eyeballs or vacancies in corroded skulls, portholes on a ship or oilwells on a car, even viewmaster goggles, these eyes are a window to nothing but themselves.

Since I began with a film story, I will end with one, too. Memory Trade talks a lot about what was called, in centuries past, the ‘art of memory’ – an arcane, taxing, somewhat esoteric form of knowledge that fell into disfavour at the time of the Enlightenment. The art of memory, as we learn, provides quite a remarkable and uncanny trailer, or prehistory, for our age of cyber design and cyber dreams. In the art of memory, people memorised things, bodies of facts or sections of an argument, by associating these things in their mind’s eye with the ordered rooms of a stately house. Later, as the orator spoke, he would rhetorically activate his store of memory by mentally taking a walk through the rooms of the house. How similar this all is to the visual thinking, the icons and memory aids of computer graphics, not to mention all the houses, rooms and passageways of “shoot-’em-up” video games and arty CD-ROMs.

There is at least one great modern film about the art of memory that Tofts and McKeich may not be familiar with. It is a film by the Chilean exile Raul Ruiz called Life is a Dream (1986) – certainly a classic title for the virtual age. It’s based on a famous play by Calderon – in fact, it’s a palimpsest, a mystic writing pad, which splices together two different authorised versions of the play, the original version, and the one Calderon drastically re-wrote after changing his religious beliefs. Ruiz’s film is about a Chilean resistance fighter who, in the underground, once decided to utilize the ancient art of memory: he memorised the list of all his revolutionary comrades – a list he of course could never commit to print – by associating the names, in alphabetical order, with the lines of the play Life is a Dream, which he also memorized.

Years later, in Paris, this man steps into a picture theatre, to watch a movie of – what else? – Life is a Dream. Each line of the play, of course, triggers a flashback in him to the Chilean resistance. But the flashbacks don’t happen in his head: they happen in front of him and all around him, in the ever-mutating space of the picture theatre itself; and all these nutty events interact with the movie that is unfolding on the screen. Birds fly through the air of the theatre and enter the movie; a chintzy train on screen becomes a toy train running under his feet between the cinema seats. At one point, the screams coming from the soundtrack of the film he’s watching start to especially confuse our lost and dazed hero; he realizes that there are screams happening inside the theatre as well. He walks up to the screen and peeks behind it: set up, there, magically, is a torture room like those he knew in the homeland, with political dissidents being tortured on cue for handy sound effects.

In Ruiz’s film, like in McKeich’s images, you can never tell where anything begins or ends: reality and fiction, past and present, memory and fantasy, life and death. They all swirl in the words of some old text long gone and yet feverishly alive, a language imprinted on everyone and reaching into the most intimate recesses of their bodies and souls. Life is a dream, and so is cyberculture – but that doesn’t mean that you can’t live it and make it with whatever humble or grand means you have to hand. That is just one of the profound lessons embedded in the rich word-and-image texture of Memory Trade.

This review is based on a text delivered to launch Memory Trade at the Centre for Contemporary Photography, Melbourne, on September 28, 1998. 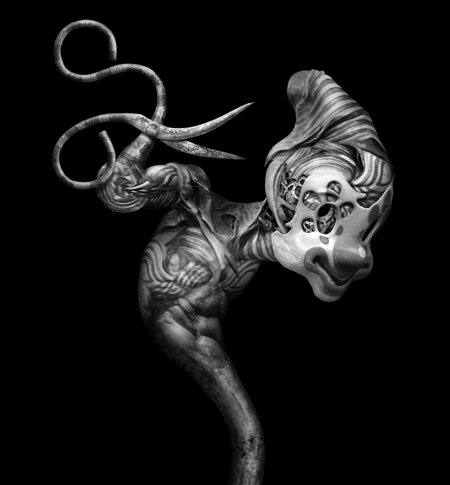 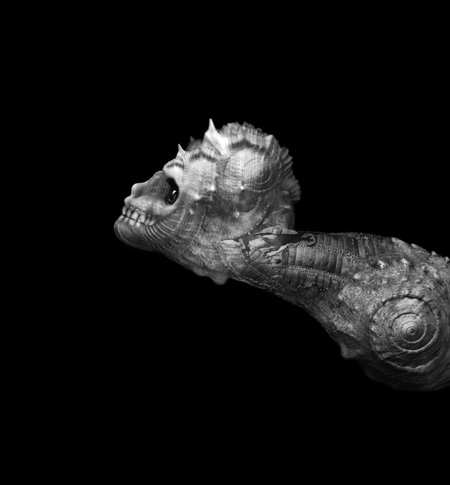 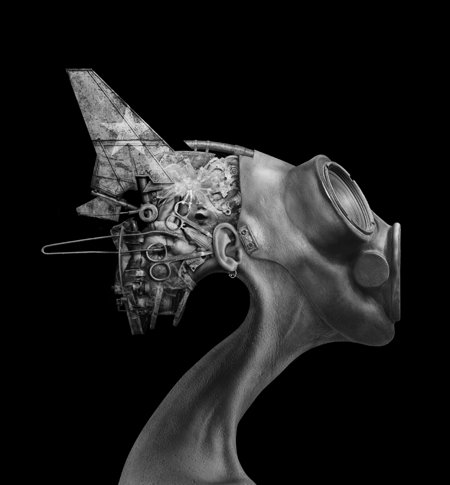 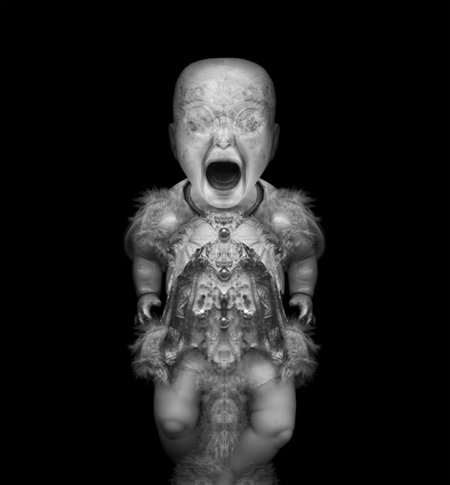