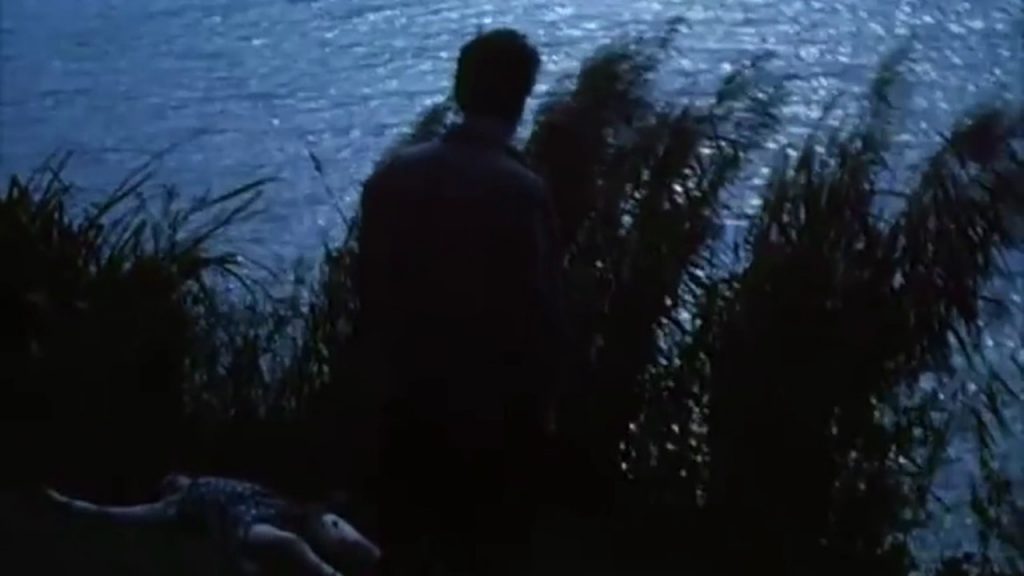 Introduction: The following document was generated by filmmaker Philippe Grandrieux in 1996, during the preparatory stages for his debut narrative feature, Sombre (1998). Like all his occasional published texts, it takes a tersely lyrical, poetic form.

Landscape
I come from the centre of France, a small town. The hill and woods of this story belong to my childhood. And if I wanted to go shoot down there, in the Rhône-Alpes region, i.e., in the Alpes, on the edge of the Rhône, close to Saint-Étienne, it was not to “flatter” any biographical urge, but so that the film could be as close as possible to what it recounts: this murky, blind, inconsolable state of childhood. I need these landscapes, their earthy colour, the soil blackened by coal, the often cloudy sky: I need them so that the film can find its unspoken, unexplained material – the means by which the images touch us.

Light
I went back to the region a few days ago to do the first test shots with different film stock, different formats, to seek out the pose, the opening, to check out the amount of light, the impression, this muffled image, against the day [contre le jour – a play on contre-jour or “backlighting”].

Because I want the film to be directed against the day. Because the light has to be won, it isn’t what makes us see, it comes from far away, from behind, it is seen through the foliage of trees or a tangle of hair, it holds the opacity of bodies in suspension, it is above all a relation to the world, an originary dazzling that returns each night to light up our dreams.

It is, for instance, the summer light in [Nicolas] Poussin, his Four Seasons, which give the sky the same intensity as the earth, which bring out the clarity of the sun and the rocks and a wheat field, it’s then a feeling, i.e., time stored in us, and this is no doubt what had an impact on cinema.

What seemed (at the Louvre in front of Poussin’s works) to be able to belong only to painting – we saw it down there, in the sky that was clear blue and tenderly, menacingly grey, this child’s-sky circling the horizon, in this up-close faded green, which we measured: sky 11, field 8 – and with these gestures of cinema, the film was already happening [au travail], as much as it will be in its shooting, editing or mixing, because it happens every time that one thinks about it, right there and then, every time that it matters for us.

Actors
The film is a whole, it’s a movement, and this question of movement is very important. Étienne-Jules Marey or Edweard Muybridge, of course, for the archaeology of cinema, its origins, but above all Ingrid Bergman, from Hollywood to Stromboli, for the desire that sets us off. The relation with the actor (whether professional or not) is above all a relation with alterity. I want my directing of the actors to be the mise en scne of this relation. The film, the fiction in all of this would then be the “documentary” in which we would see this movement leaving from itself to go toward the other, then returning from the other back to the self: there is no relation other than a reciprocal one.

Frame
I’ve always framed my own films [i.e., operated the camera], in order to have a direct, immediate, intuitive relation with what’s there, with presence, it’s a sensation, first of all a sensation, an emotion, a movement of the soul, that’s what framing is, to let myself be carried away by what I feel, it’s to forget myself, that’s it … The presence of the other, of what is in front of me, and then the oblivion of the light, eyes tight shut at times … and yet it hits the mark, it frames, I don’t know how to explain it better, these questions of presence and oblivion, it’s movement and it goes from one face to another, it’s a rhythm, a means of moving brusquely or, on the contrary, hesitating, of going beyond what is there, then to come back, to bring into focus or to remain blurred, to be too close, a way to follow the action and then to distance myself from it and allow it to finish outside of the frame, to go back there when nothing is happening anymore, just before the cut, this is the materiality of the frame, its incarnation, it’s the cutting-up of the Real, that’s what is mine.

Story
So it’s the movement, making it circulate, between the light, the landscape, the frame, the bodies, the actors, the grain of their voices, making all that cohere, tie into the story, a love story, about a love which is a grace, which touches Claire [Elina Lšwensohn] and makes her feel this explosion which we are, held in her, leading her to a new life, and it’s Jean [Marc Barbé] who takes her there, the fact of passing from one side of the river to the other, he who can be nothing but the passeur, condemned by his murderous drive and unable to live among others, he who is night, the dark night of John of the Cross, a beam of shadow, yes it’s him who returns Claire to the light, and it’s possible, it’s like a miracle, because Claire doesn’t refuse it, that’s her strength, she welcomes what happens, what he gave her to live, his ecstasy, she doesn’t want to change anything, she doesn’t try to make Jean anything different, she loves him as he is, and that’s what saves her from her despair, from fatal sickness, and that’s the film’s movement, Jean gives her back to the world, he who is the death-dealer returns her to vital life.

It’s inexplicable, it’s beyond psychology, it could be a fairy tale that the film inscribes in a festive reality (the Tour de France, parties, 14 July … ), where the aspect of childhood will be ever present.

After having hesitated for a long time over whether Jean would go so far as to kill (and whether we would see that) or not, it finally seemed to me very important that the character goes to this extreme, that his movement toward the other, all others, is so hindered, so compromised.

Philippe Grandrieux (born 1954) is a renowned film director, television producer, installation artist and writer. His cinema features include Sombre (1998), Un lac (2008) and Malgré la nuit (2015); his gallery work includes the triptych Unrest (2012-2017); and his production of Wagner's Tristan and Isolde features in the 2023 repertoire of Opera Ballet Flanders.View all posts by Philippe Grandrieux →
© Screening the Past publications