Screening the Past > The Artist as Ecologist

The Artist as Ecologist

For some years now the activity of the artist in our society has been trending more toward the function of the ecologist: one who deals with environmental relationships. Ecology is defined as the totality or pattern of relations between organisms and their environment. Thus the act of creation for the new artist is not so much the invention of new objects as the revelation of previously unrecognized relation- ships between existing phenomena, both physical and metaphysical. So we find that ecology is art in the most fundamental and pragmatic sense, expanding our apprehension of reality.

Artists and scientists rearrange the environment to the advantage of society. Moreover, we find that all the arts and sciences have moved along an evolutionary path whose milestones are Form, Structure, and Place. In fact, man’s total development as a sentient being can be said to follow from initial concerns with Form or surface appearances, to an examination of the Structure of forms, and finally to a desire to comprehend the totality of relationships between forms, that is, Places. Since it generally is thought that art represents the avant-garde of human insight, it is interesting to note that science itself has evolved through Form, Structure, and Place appreciably in advance of the arts.

The conception of the principle of the atom by the Epicureans in Greece approximately 2,000 years ago began that stage of science chiefly concerned with Form, which included the contributions of Euclid, Descartes, Copernicus, and Kepler. The Structural phase of science might be epitomized by Newton and Clerk Maxwell, although we must leap forward in time and include Rutherford and Bohr, who found a structural model for the atom in the planetary system. The stage of science that I’ve designated as Place is represented by Einstein and Max Planck, and has to do with space/time, synergy, and entropy, all of which subsume both Form and Structure.

It is interesting to note that the terms economy, ecumenical, and ecology share a common Greek root: oikos, a house. Following a period of Karmic Illusions (pre-Space Age history), the Renaissance Man emerges from his cocoon with difficulty (the generation gap) to find himself the master of a whole house and attendant guest cottage (the moon), and with nothing to do – the Leisure Problem. So the artist, not the politician, finally is accepted as the true legislator of mankind. Today’s artists work empirically with problems of leisure and decision-making. Men like Robert Rauschenberg, Robert Morris, and Robert Whitman are concerned more with the personal responsibility of their audience than with creating objects to be “owned,” since ownership is seen as an irresponsible concept when the obvious need is for global synergy. So we see that Duchamp’s penetrating description of art as “defined by context and completed by the spectator’s response” anticipated the present symbiosis of artist and ecologist.

That description also anticipated the burgeoning of intermedia art as one of the most significant developments of twentieth-century society. Buckminster Fuller has differentiated mind from brain by demonstrating that the brain performs “special case” functions on individual, discrete bits of information, whereas mind is concerned with “general case” metaphysical relationships and implications. In our discussion of intermedia art I intend to present the general case. This approach begins with the word itself: I might have used mixed media, certainly a more common and identifiable term; but an environment in which the organisms are merely mixed is not the same as an environment whose elements are suffused in metamorphosis.

During the 1960’s a group of artists and engineers, working under the name USCO, pioneered in the development of multimedia performances and kinaesthetic events throughout the United States, Canada, and Europe. More recently, Gerd Stern and other members of USCO have joined with a group of behavioral scientists from Harvard University to form the Intermedia Systems Corporation, whose purpose is to “. . . explore multi-channel audio-visual techniques and design of facilities, hardware and software” primarily for use in education, but with a view toward entertainment as education. Since education is the obvious direction in which virtually all communication is trending, perhaps this group’s definition of the word intermedia would be most appropriate here: “Intermedia refers to the simultaneous use of various media to create a total environmental experience for the audience. Meaning is communicated not by coding ideas into abstract literary language, but by creating an emotionally real experience through the use of audio-visual technology. Originally conceived in the realm of art rather than in science or engineering, the principles on which intermedia is based are grounded in the fields of psychology, information theory, and communication engineering.”

For some time now it has been clear that intermedia art is trending toward that point at which all the phenomena of life on earth will constitute the artist’s palette. It is the purpose of this chapter to illuminate the direction of that trend and to cite a few pertinent examples. As with all other Paleocybernetic phenomena, the direction is simultaneously toward inner and outer space, the microcosm and the macrocosm. On the one hand, intermedia environments turn the participant inward upon himself, providing a matrix for psychic exploration, perceptual, censorial, and intellectual awareness; on the other hand technology has advanced to the point at which the whole earth itself becomes the “content” of aesthetic activity. The term “light show” must now be expanded virtually to include the aurora borealis, since hemispherical lumia displays are possible in the creation of artificial plasma clouds in space (see color plates), the launching of rockets to generate atmospherical events, or urban environmental generators such as Nicholas Schoffer’s monumental Cybernetic Light Tower, which transforms the skies of Paris into panoramic fantasias of color.

Implicit in this trend is another facet of the new Romantic Age. The new consciousness doesn’t want to dream its fantasies, it wants to live them. The child of the Paleocybernetic Age intuits that his life could be a process of nonordinary realities if the energies of the globe were properly distributed. We’re developing all these fabulous hardware systems that soon will make life a process of continual myth-generation for the individual as well as the collective ego. “We’re just fooling around on the outer edges of our own sensibilities,” says Stan VanDerBeek. 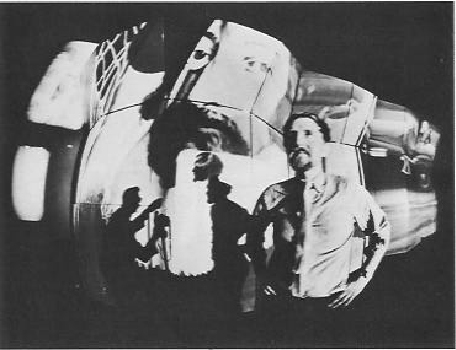 Unconsciously we’re developing memory storage and transfer systems that deal with millions of thoughts simultaneously. Sooner than we think we’ll be communicating on very high psychic levels of neurological referencing. It’s becoming extremely rich. This business of being artist in residence at some corporation is only part of the story; what we really want to be is artist in residence of the world, but we don’t know where to apply. Major internationalizing by artists is going to become very important, and so will the myth-making process. What we’re looking for in some sociologically appropriate way is a third side to each confrontation: a way to deal with each other through a medium.

All media, like the automobile and telephone, are essentially a third party which relates us to whatever else it is we’re doing. I think the student riots are a manifestation of a deep-seated awareness of this problem. There’s such a contagiousness now with rioting; I think we realize that rarely do we directly deal with issues, personally, physically, intimately, with real body contact. That could easily be the cause, or at least partial cause, of the riots. We suddenly realize that riots may be the only real form of theatre left in which we’re not just an audience. 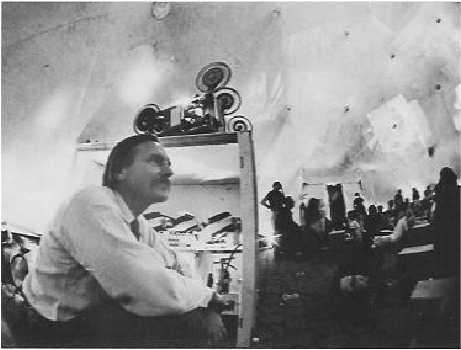 But, you see, being an audience is necessary. A major factor in living in an overpopulated world is that we really cannot deal with each other directly. As the Japanese do, for example. They’ve spent thousands of years cultivating this idea that they’re there but they’re not there. Because they’ve been jammed together for a long time, they’ve learned how to do it. Now our culture is moving in that direction also. That’s one reason for all these transfer systems – photo-reality, mock-reality, artificial intelligence, whatever term you choose – are spontaneously and unconsciously evolving. It’s a tremendous urgent unconscious need to realize that we can’t really see each other face to face. We only see each other through the subconsciousness of some other system. Cybernetics and the looping-around of the man/machine synergy are what we’ve been after all along. Who knows, but certainly for the last thousand years man has been inching toward that point, and now we’re running full speed. And, of course, the machines we’re running toward can trip us up as easily as not. We really can’t be certain. But movies are the ultimate illusionistic system. I’m working more and more with tools that show it can go far beyond its present form. Holograms obviously are a key direction to go into: where things are stored on a molecular level.