Screening the Past > Cerebrum: Intermedia and the Human Sensorium

Cerebrum: Intermedia and the Human Sensorium

The technology to produce such environments as Kroitor and Thompson describe has existed for some time; what has not been available is the necessary consciousness. Man has been so busy proving his right to live that he has not learned how to live. Thus we exist in an environment almost totally bereft of aesthetic sensibilities; we are conditioned by architecture of the most vulgar design; our entertainment is of the lowest level of conditioned response to formulas; our traditional mode of interpersonal relationships is practically bankrupt of integrity; the economic system forces us to act for “profit” rather than use; there is hypocrisy and violence everywhere. Disneyland is this culture’s idea of a sensorium. Yet the evolution of intermedia, from the primitive shadow show to Wilfred’s color organs to the cybernetic phantasmagorias of contemporary world expositions, indicates an increasing human capacity to assimilate and comprehend more complex environmental stimuli. The existence of something like New York’s “Cerebrum,” therefore, is hardly surprising: it’s one of many current phenomena that constitute a pattern-event toward the eupsychia that is implicit in the intermedia experience as a kind of sensory-stimulation laboratory.

Cerebrum is among the first indications of an imminent trend that simultaneously will transform and unite those disparate social experiences characterized by “nightclubs” on the one hand and “art galleries” on the other. Cerebrum is neither. There’s nothing for sale at Cerebrum except time. And although certain synthetic events do occur, they are such that one’s relative participation determines their effectiveness. So one could say that Cerebrum not only isn’t an object, it doesn’t even lay claim to an identifiable, marketable experience; that’s because Cerebrum (the place) exists in cerebrum (the mind). Fundamentally, one purchases three hours of time in which to practice leisure, decision-making, interpersonal responsibility, body awareness, and sensory perception; Cerebrum’s “guides” supply the necessary intermedia environment. 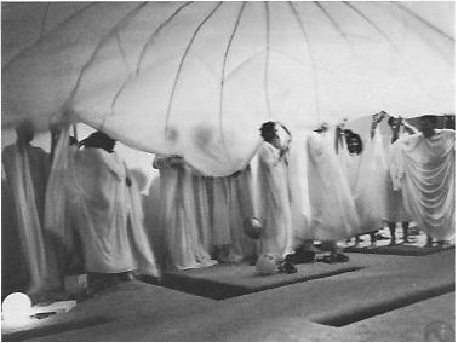 An evening at Cerebrum follows from Form to Structure to Place. You get out of the cab in a sleazy slum neighborhood and ring a buzzer. The door opens automatically and closes behind you, locking. You find yourself in a small black cubicle about four feet square. A hidden speaker asks your name, and after a few minutes one of the walls opens. You are led to an anteroom where you are asked to remove your shoes. A boy and a girl, obviously nude beneath diaphanous flowing gowns, lead you down a narrow corridor to a large white rectangular space.

This is the Form level: from a dark closet to a larger room, down a narrow hallway to an open space. Next comes the Structural experience: the floor actually is a raised, carpeted platform sectioned into geometrical islands inset with electronic control panels. These islands are approximately three feet above the real floor, and you are forced to pay close attention to where you step.

The guides lead you to a particular island (there are about ten of them, each accommodating four persons). You are instructed to put on a gown, and are invited to remove beneath it as much of your clothing as you desire. Glancing around, it becomes obvious that nearly everyone is nude beneath his gown, so you strip. The sensation is delicious, especially for men, who are not accustomed to being naked beneath a long silk gown. One is immediately self-conscious, but not embarrassed; one simply becomes fascinated with the feel of one’s own body in its silken envelope.

The first half-hour of the three-hour “session” is spent adjusting to the environment, staring at bodies as they pass in silhouette, wondering what to do with yourself, and finally venturing off your island to walk among the other guests, feeling the air on your skin: this is the Place experience. A noticeably eclectic selection of music (from polkas to swing-era ballads, ragas, rock, symphonies) seems to come from nowhere in particular, and a cool passive light show plays ambiently across the walls and ceiling. Eventually, the guides pass around tambourines, gongs, triangles, and flutes, encouraging everyone to play along with the Muzak.

During this time I began to notice what for me was the most interesting aspect of the experience. People began to act out their fantasies, get into their own realities, perform anonymous little psychodramas. One refined-looking, silver-haired, middle-aged gentleman knelt and gazed lovingly at his matronly wife as she danced before him like Scheherazade, palms pressed together over her head, hips swaying in silhouette. It was, perhaps, a fantasy they had never realized in the privacy of their own bedroom. Elsewhere, a beautiful young girl who wouldn’t remove her panties was “raped” by her husband, who peeled them off beneath her gown as his friend held her arms. She squealed in mock anger and false modesty, but an hour later could be seen twirling about the room like a ballerina, her gown flying far above her shapely hips. 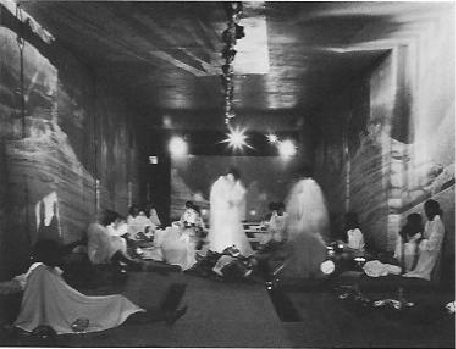 Cerebrum: “All the senses were stimulated in various subtle ways.” Photo: Ferdinand Boesch.

Thus, for some, Cerebrum becomes an excuse to do and say things they might not otherwise attempt. The two examples I’ve cited occurred rather anonymously, and probably went unnoticed by most of the guests. The nature of Cerebrum is such that it would be difficult to create an unpleasant scene.

I found the unisex effect of the gowns quite stimulating. At one point male guides came around with mint-flavored menthol ice that they smeared on our lips with their fingertips. “What does it taste like?” they inquired softly, as though not expecting an answer. This intimate contact with a complete stranger in a relatively “public” setting was a challenging experience, particularly for men, who are not as disposed as women to physical intimacies in public. The young men were followed by girls who daubed our foreheads with a similar skin-tingling substance. These sensual encounters had an ethereal, gentle, transcendental effect. One appreciates the delicacy and poise necessary to accomplish them without embarrassment.

At one point a scented fog was released from beneath the platforms, filling the space with an eerie haze through which one could see ghostly figures moving and dancing. Needles of light from a mirror-globe cut through the fog like electrons in a cloud chamber; it was beautiful. Next a huge parachute was spread out; half of the guests lay on the floor beneath the parachute as the other half stood around its circumference, raising and lowering it to form a suction that lifted gowns, and exposed bodies, but no one cared; we just closed our eyes and enjoyed the sensation, rather like dreaming that one’s bed is flying away.

All the senses were stimulated in various subtle ways: the touch and taste of the camphor ice on the lips, the slippery intermingling of hands and feet, the scent of the vapors, the kinetic stimulation of the light show and parachute, the visual alterations in the general level of luminosity that also affected one’s perception of forms and distances. Bits of melon and fruit were passed around, as well as a communal mug of Coke. There was no sensation-numbing alcohol.

A kind of hypnotic centering took place when a giant balloon, anchored to an outlet in the center of the floor, began inflating slowly with a loud steady hiss. The balloon was illuminated from a spotlight on the floor beneath it and glowed eerily as the houselights were dimmed. Everyone sat in the lotus position and gazed as the luminescent sphere loomed above our heads. Then it was deflated just as slowly. A simple but effective experience.

At Cerebrum one is voyeur, exhibitionist, and participant. One is both male and female. One is a walking sensorium. Surely we can foresee that not-too-distant day when “nightclubs” will be operated by art dealers who commission artist-guides to create ecological-experience places that will resemble Cerebrum in many respects. In other ways, however, the intermedia palaces of the near future will embrace bold new vistas of human experience. “I can envision a world in which people’s lives are recorded,” says intermedia artist Tom DeWitt, “and a massive amount of material is accumulated, vast libraries, and people who never meet other people but just spend their lives editing audio-visual records of their own existence. When you look at a mixed-media show there’s an awful lot of information; it’s beyond the comprehension capabilities of most people. But if it were an intermedia show made for an individual whose life was being portrayed, he could relate to it. I can imagine people having traumatic experiences in such an environment and coming to some idea of who they really are.” In the pages that follow I hope to demonstrate that intermedia art is but another path in man’s ancient search for himself.