Screening the Past > The Living and the Undead, Gregory A. Waller

The Living and the Undead, Gregory A. Waller 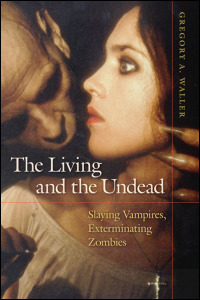 In the Criitque of Pure Reason Kant draws a distinction between negative and indefinite judgment. As Slavoj Zizek has pointed out, the example that Kant uses is very telling in the context of the un-dead: the positive judgment, by which a predicate is ascribed to a subject (S is P), is given as “the soul is mortal”; the negative judgment, by which a predicate is denied to a subject (S is not P), is given as “the soul is not mortal”, while the indefinite judgment, in which a certain non-predicate is affirmed (S is not-P), is given as “the soul is not-mortal”. The difference between the negative and the indefinite judgment thus appears as a matter of spacing. All this has an immediate bearing on the notion of the un-dead, or the living dead. As Zizek has also indicated, we resort to indefinite judgments in our ordinary language, exactly “when we endeavour to comprehend those borderline phenomena that undermine established differences such as that between living and being dead”. The same argument applies to the notion of the uncanny, which Freud similarly derives as an indefinite judgment, based on a consideration of the derivation of the word unheimlich and its relation to heimlich. (Nicholas Royle has shown that a similar relation holds between “canny” and “uncanny” in English.) The un-dead, that is, uncanny creatures such as vampires, zombies and so on, are neither alive nor dead: “he is un-dead” thus is a perfect example of the indefinite judgment, inasmuch as vampires are excluded from the domain of the living without therefore being included in the domain of the dead. The un-dead retain the characteristics of a living creature, without being one. As Freud saw the matter, the uncanny pertains to all that was intended to remain secret, hidden away, but which has, nevertheless, come into the open. As Hal Foster has shown, the uncanny, with its attendant notions of repetition, the death drive and doubling, is as fundamental to the procedures of surrealism as it is to the horror film. The uncanny does not oppose the world; it hollows it out from within, opening it towards an abyss. The return from the grave of the un-dead is the appearance of something profoundly other, something that blurs the distinction between imagination and reality, between the symbol and what is symbolised.

Because Waller’s book is a paperback reprint of the earlier 1986 hardback edition, no attention has been paid to these questions, which have been raised only in recent years. His approach is essentially thematic, rather than structural. He makes use of the ideological distinction drawn by Ferdinand Tönnies between Gemeinschaft (community) and Gesellschaft (society), where community is intended to evoke a unity expressive of “mutual affirmation” while society is based on isolation, individualism, “potential hostility or latent war”. In Stoker’s Dracula, according to Waller, community is what the vampire-hunters, led by Van Helsing, form together, a “community bound by spiritual friendship and a common goal”. This, however, leaves the vampire in a somewhat anomalous position: Dracula can hardly be said to represent society and the erotic charge of his enjoyment is not to be assimilated to any code other than his own. The vampire is a kind of unrepresentable Thing, and the space he occupies is neither that of community nor that of society (even if we accept that distinction in the terms given). The vampire occupies an uncanny space that Lacan called “l’entre-deux-morts”, between two deaths, a gap between the Symbolic and the Real. For Lacan, it is what dwells here that is the ultimate object of horror.

A film that gives an overwhelming sense of this order of horror is Dreyer’s Vampyr (Germany 1932), a film Waller refers to only in passing. But a similar order of experience is made evident in Murnau’s Nosferatu (Germany 1922). The film ends as Nina Harker sacrifices herself to save the city of Bremen. Jonathan rushes into the bedroom and embraces her, only for her to sink back and die. Waller sums the scene up thus: “only in this final image of the Harkers, after Nina has sacrificed her ‘pure’ heart to the vampire, do Jonathan and his wife share the same bed—their marriage ends before it can truly begin”. We don’t, of course, know what the relations Jonathan and his wife have been. At the start of the film, when we first see them, they appear loving and physically very close. What one can say is that Nina is only able to destroy the vampire if she is willing to join him in that space between two deaths, and this she does, in her passivity, for all the time during the night while he remains beside her, bent low over her neck. It is the book Jonathan returned with, the Book of the Vampires, that has brought Nina to this condition: in other words, it is the Symbolic order itself, as represented by the book, an order that stands for death, in the sense of mortifying the Real of the body, that brings her to that which eludes symbolisation. As Dreyer does also, Murnau associates the vampire with the very film that we are watching. Both films present us with issues of representation and meaning as they are inflected by the death drive, a force that, neither living nor dead, partakes of the demonic.

Michael Grant was born in 1940. He studied English at Cambridge, and later taught the subject at the University of Kent. He went on to become Senior Lecturer in Film Studies until his retirement.View all posts by Michael Grant →
© Screening the Past publications