Screening the Past > Strange Bodies: On The Great Race

Strange Bodies: On The Great Race

This article was first published in English in Cahiers du cinéma in English, Number 3, 1966. 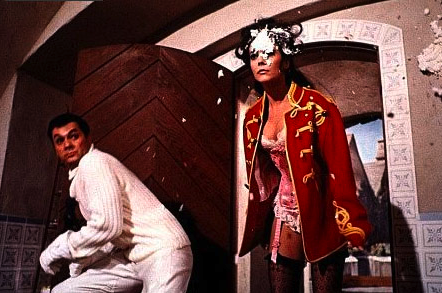 The film is disappointing enough; yet The Great Race is the film of which Edwards has been dreaming for a very long time, the pure animated cartoon that the earlier films foretold. Was he wrong to tend always more towards the cartoon? There was indeed at the end the absurd bet of The Great Race, but this road passed through The Pink Panther and A Shot in the Dark. Thus it happens that a false idea is revealed as such only after having allowed some truths to emerge. Those truths were that world that was created under our eyes, with its fauna and its logic, at the same time tender and nerves-on-edge; they were the two films with Peter Sellers. But The Great Race, at the same time an accomplishment and a failure, better stresses what was of value only sketched, implied, grazed, without the aid of Cinerama.

The metteur en scène is he who stretches his nets, more sure of his wait than of his catch. The films of Blake Edwards live on one insidious little question: how do people react? A mise en scène is a mise en condition, a setting-in-a-state; to wait until a gentle drunkenness, a sudden derangement, will half-open the doors of the strange, perhaps even, with a little luck, of madness … Drunkenness plays a major role in the films of Edwards (Breakfast at Tiffany’s and, of course, Days of Wines and Roses). The point is that it does bring things on abruptly, it hurries nothing; it forms and deforms slowly. Those who gives themselves up to it or who are given up to it are not lost in it, but their timidity suddenly becomes humour; their irony, lucidity; their unconstraint, choreography. The cineaste does not treat people abruptly either; he knows that there is always a privileged moment, a privileged place, where the unthinkable becomes possible, and the impossible, familiar. Then how do people react? In the form of gags, of strange confessions and of gentle nostalgia … That is the famous malice of Edwards. We owe him the most tender films and the most discreet melodramas. It was enough barely to jostle the characters, glib, vulnerable, and a little weak (they are always the same, brilliant and insipid; Tony Curtis, Jack Lemmon, David Niven …), and to observe their reactions. Now, there are gags too in misfortune. But it appeared more and more that there were two veins in Edwards. And always the same question: how do people react? You know that that question is in the centre of the animated cartoon as well. Of course, there is less tenderness, and more of the mechanical, are needed. No doubt Edwards was determined to escape from this slightly satisfied melancholy, this encumbering timidity; he had only to take up his work again, but to strengthen its drawings, to enlarge his strokes, to tighten its contours. To give to its characters, rather than a dim life to drag out, a role to play, and, in the limit, a symbol to incarnate. There was first Clouseau. But he is still too human, too near the cinéaste. The anonymity, the inconsistency, of Leslie of The Great Race were necessary—Leslie all clothed in white, for he represents the Good. Edwards, logical, simplifies to excess, erases and caricatures. Does cinema gain by it? The reply is at the end of a detour and the detour passes through drawing and its virtues.

Each week, for a year, from drawing to drawing, Copi [1] presents the same character. It is a woman, bad tempered but simple, with straight hair, sitting facing a void from which all realities come to her, one more unthinkable than another. Her mind alert, her eye fixed, she is there, but always to be flouted, disappointed, outdone … At length, her mere presence, her obstinacy in “being there,” are enough to make one smile. Each week, at each new ordeal, it a little of our world that she discovers; gestures, words, reasonings, bits and pieces that in the end make up er experience, enclose her in what must indeed be called her “character,” for she has one, irreducible …

The pleasure of the animated cartoon: the mind that knows that it will be surprised, wonders then how it will be surprised and enjoys knowing itself, for a few instants, outdone. It is always the unexpected that happens but in a landscape each day more precise and on which each adventure leaves an irrefutable mark. All this life—contradictory, complex—which seemed refused to this character so crudely formed (in a few strokes of the pen) comes to meet him. One day, the drawing no longer has to be comic, efficacious, or comprehensible, for it no longer has to prove anything, still less to establish anything; it is out complicity that makes it live and makes us, again, laugh. At the end of the year, Copi (but one might equally have cited Jules Feiffer or Don Martin has invented, a not a drawing, but indeed, a world, entirely as opaque, mad, and obscure as our own. That is to say (and this is the moral of this digression) that in the measure in which it repeats itself, the animated cartoon (or the comic drawing) acquires what was not given to it: Density, and in that way rejoins what it had as its mission and to simplify: life.

Life is precisely what Leslie and Fate have a priori, what they will not succeed in making one forget. However Edwards, who always liked lightness and unconstraint in his characters, this time wanted them insipid and inconsistent, less important than their colours, their costumes, their machines. Docilely, they apply themselves to existing as little as possible, and their race around the world, short-winded and laborious, seems particularly destined to prove that, precisely, no surprise is possible (with the exception of a few parentheses and unexpected happy encounters, like the episode of central Europe, the duel, etc.).

At the end of the narrative Blake Edwards dreams of a world which has lost all density, of characters without weight, without bodies, escaping gravity, the dimensions of the world becoming the frame of a gigantic cartoon. This temptation that enhanced the earlier films ruins The Great Race, whose premise it seeks in itself. Indeed one sees the characters of Copi acquire the density they lack, but one barely sees how Leslie and Fate could deny their faces, their too-human look, their too heavy bodies. But in The Great Race—and this is precisely what Cinerama stresses and denounces at each moment—in spite of all their goodwill, Leslie and Fate are first Curtis and Lemmon, and the heroine, Natalie Wood. And so all that one should forget crops out more than ever: the wrinkles of the one, the histrionics of the other, the vulgarity of the third, each encumbered with his body, with this life, entropic, which however is the raw material of cinema.

[1] Copi is the nom de plume of Raúl Damonte Botana (1939 – 1987), an Argentine writer and cartoonist. He was based in Paris for most of his career and regularly contributed cartoons to the monthly French gay magazine Gai Pied.