Screening the Past > British Culture and Society in the 1970s: The Lost Decade, Laurel Forster and Sue Harper (eds)

British Culture and Society in the 1970s: The Lost Decade, Laurel Forster and Sue Harper (eds) 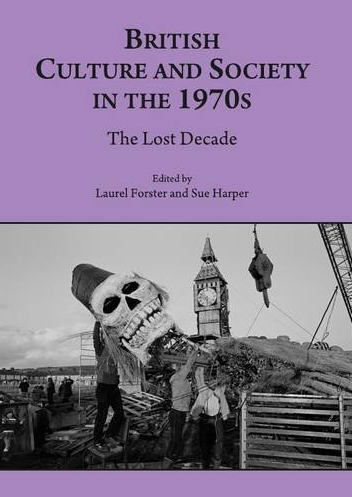 As Laurel Forster and Sue Harper relate in their Acknowledgments and Preface, the scholarship in British Culture and Society in the 1970s: The Lost Decade was borne out of a multi-year Arts and Humanities Research Council (AHRC) research project on British cinema in the 1970s. Overseen by Harper, this project coincided with a veritable wellspring in academic interest in this neglected cultural period, which elsewhere has garnered the unfortunate (and jocular) moniker of “the decade that taste forgot.” In addition to this project’s 2008 conference “British Culture and Society in the 1970s”—the event that prompted the book under review—are recent anthologies Seventies British Cinema (2008, ed. Robert Shail, BFI/Palgrave) and Don’t Look Now: British Cinema in the 1970s (2010, ed. Paul Newland, Intellect Books: curiously, itself a volume sourced in a 2007 University of Exeter conference on British film), to say nothing of the wave deep archival releases on DVD labels in Britain as well as the United States. While the other two collections focus exclusively on the (surprisingly varied) screen cultures of the decade, Forster and Harper’s book has a wider remit. As such, what becomes apparent on first glance is the book’s very ambitious scope, with coverage of everything from politicized urban development schemes (Neave Brown’s famously modernist Alexandra Road housing project) to the rhetoric of feminism in the era’s women’s magazines. What keeps British Culture and Society from coming across like an odds ‘n sods sounding post for the decade is the relative lack of definition already in place. Larger scale historical examinations of Britain in the 1970s rarely look at the sustained contextual importance of specific texts, let alone such strangely pervasive (and consequently, hard-to-anchor) phenomena like The Wombles (who, according to Keith M. Johnston, are “furry animals who tidy up after litter-happy humans,” whose popularity began in children’s books, but later launched into the promotional stratosphere with a television series and innumerable commodity tie-ins) (p. 154).

Media studies scholars interested in the transmission of cultural values via broadcast entertainment in the public interest will find a number of original case studies. In “John Berger’s Revolutionary Narratives,” Rochelle Simmons looks at Berger’s relationship to the revolutionary historical legacy of 1968, in the process suggesting that his political commitments of the 1960s are alive and more thoroughly nuanced by the 1970s (p. 23). Though space is given to Berger’s novels, Simmons also considers the path breaking Ways of Seeing, as a continuation of his previous work as an art critic, his exposure to the recently translated ideas of Walter Benjamin, and as a response to the phenomenal success of fellow art historian Kenneth Clark’s Civilisation (1969). Against normalizing, patronizing, and paternalistic understandings of public service broadcasting, Berger “takes aim at class supremacy based on property and wealth,” in the process suggesting that the art world and its institutions need not be the sole provenance of the disproportionately privileged (p. 18). Put another way, Berger’s work of the 1970s attempts to realize the suspended dream of 1968s egalitarianism. In “’And finally…news for children’: An Insight into the Institutional Development of the BBC Children’s News Programme John Craven’s Newsround,” Julian Matthews looks at the policy behind the founding of the first British news show aimed specifically at children. Much like Berger, Edward Barns, John Craven and the staff of Newsround constituted their news bulletins with the BBC’s Reithian legacy of public service and informed citizenship in mind (pp. 167-170). Given limited resources, and a strange home somewhere between the Children’s Programming and News departments, the show adopted a policy of relaying news narratives in such a way that they would be understandable by children, on topics that would be of interest to both children and adults. These stories range from benign and emotionally touching accounts of pandas in a Japanese zoo to forthright discussions of the “Troubles” in Northern Ireland (p. 171). What essays like Simmons’ and Matthews’ do is disassociate the British 1970s with questions of kitschy cultural populism, instead refocusing discussions around serious media interventions in the lives of everyday Britons.

For scholars of cinema, the most relevant section of British Culture and Society in the 1970s is the section on Film Production Contexts,” which contains four essays on generally neglected or occasionally unfashionable producers and directors. Andrew Spicer’s “The Precariousness of Production: Michael Klinger and the Role of the Film Producer in the British Film Industry during the 1970s” assesses Klinger’s attempt to negotiate a failing, financially moribund film industry while still maintaining aspirations towards large-scale, action-driven epics in the American tradition. The chapter focuses on the production, reception, and generally botched distribution of Gold (UK 1974), an ambitious entry into the British genre of roaring action-adventure films. Adam Locks provides a sympathetic (if somewhat overstated) reading of horror auteur Norman J. Warren. This “Anglo Argento,” like his Italian parallel, seemed to perpetually walk the fine line between the shoddy production values occasioned by low budgets and the necessity of invention put forth by monetary restriction. For example, Locks provides an extended reading of Satan’s Slave (UK 1976), a film that draws associations to everything from The Avengers to heritage costume drama to psychogeography. In his final analysis, Locks says that “it could be offered that the film becomes a rather curious, yet pleasurable, mélange of images alluding to other fictions that play with notions of reality; for example: Luis Buñuel’s love of the inexplicable in cinema; the artist Paul Nash’s fusing of the uncanny with the English landscape; Lewis Carroll’s kaleidoscopic play with the “real” and Argento’s (con)fusion of reality with dreams” (p. 224). If Locks has to overstate his case in order to convince of the value of Warren’s work, which is elsewhere dismissed or lost next to the more frequently studied films of (for example) Pete Walker, then the section is rounded out by two essays on more historically recognized directors who are frequently acknowledged for having harnessed fantasy to decidedly personal ends. The “Cinema Authorship of Lindsay Anderson” research team—John Izod, Karl Magee, Kathryn Mackenzie, and Isabelle Gourdin—at the University of Stirling (which houses the director’s personal papers and effects) offers an admirable reading of musician Alan Price’s importance to Anderson’s film O Lucky Man! (UK 1973), while Adrian Garvey provides an extended mediation on Ken Russell’s “anti-musical” The Boy Friend (UK 1971).

Despite an almost over-abundance of material, and a rather lackluster and purely functional presentation on the part of the publisher, Forster and Harper’s British Culture and Society in the 1970s provides a fine compliment to the emergent reconsideration of British attitudes of a still-obscured decade.